Find out how to treat the bite as well as what you can do to reduce the number of biting incidences and the risk of mosquito-borne diseases for you and your family.  Start by devising an effective DIY mosquito control program which incorporates a proven trapping system to reduce mosquito numbers, personal protection in the form of repellents, and a proactive approach to reducing and eliminating mosquito breeding sites around your property.

The first step in reducing mosquitoes on your property is to identify and eliminate all sources of standing water including low spots, ditches, and gutters. During the day, mosquitoes love to rest in tall grass or amongst shrubs in a moist, shady spot. Keeping the grass short and bushes trimmed deprives them of a resting place. Rake up any fallen leaves as well. An overturned leaf can hold enough water for a mosquito’s eggs, as well as give them a place to wait out the day.

Let science help solve your mosquito problems. Today’s mosquito traps are smaller, more effective and surprisingly affordable! A consumer favorite, the Mega Catch™ Ultra has outperformed many competing traps in independent tests, thanks to its unique, propane-free, CO2 system.  Combining proven mosquito-attracting science in a simple to operate, user friendly design the Ultra gives coverage of up to 1.5 acres and is designed to operate with or without Mega-Catch’s™ patented ‘Variable Quantity Slow CO2Gas Release System’.

The optional CO2 system has been designed to enhance trap performance by increasing the range and capture rates (by as much as 300-400%) of a wider variety of mosquito species and other biting insects.

Bear in mind that repellents do not protect all users equally. The effectiveness of a repellent depends on the mosquito species that is biting as well as the age, sex, level of activity, and attractiveness (to mosquitoes that is) of the human using the repellent. In general, mosquito repellents work by masking the chemical cues that invite mosquitoes to dine.Despite rumors and anecdotes of everything from banana peels to garlic tablets warding off mosquitoes, the U.S. Centers for Disease Control (CDC) recommend only three types of repellents for safe and effective use:

It’s not possible to eliminate every single mosquito. So if you are unlucky enough to get bitten by a rogue mosquito, whatever you do, don’t scratch the bite – no matter how good it feels. It can take up to two days before the itchy bump or wheal appears, and scratching it will just break the skin which could lead to infection. Wash with soap, run cool water over the bite, and be guided by the experts.

Mosquitoes’ Sense of Smell Appears to Be Stronger Than Their Sight

Researchers collected data from approximately 250 female mosquitoes (male mosquitoes do not feed on blood), tracking their behavior and recording in real time the mosquitoes’ brains during a series of experiments conducted in a cylindrical arena about 7 inches in diameter. The scientists were able to measure the mosquitoes’ wing movements (using a special type of optical sensor) in response to different odors and visual stimuli.

The mosquitoes also beat their wings faster in response to the visual cue of a bar moving horizontally across a screen around the arena. The mosquitoes tried to move in the direction of the moving bar. But increase in wing-beating speed was more pronounced when mosquitoes smelled the puff of CO2 before they saw the moving bar, compared with just seeing the bar move.

What’s in the Spray?

Do mosquitoes prefer one blood type over the others? As it turns out, yes. Scientists first landed on this discovery back in 1972. More recently, a Journal of Medical Entomology study further broke down certain species of mosquitoes’ preferences.

Which Blood Types Do Mosquitoes Prefer?

People with Type O blood are more than universal donors. They’re also “tastier” to mosquitoes. In fact, according to a study, certain species of the insect landed on the skin of people with Type O blood almost twice as often as they did on the skin of those with Type A. But what about your blood type draws mosquitoes to you? Well, people secrete certain chemicals through their skin. The chemicals you produce will depend on your DNA, which also determines your blood type. that some of these chemicals — like lactic acid — can attract more mosquitoes. 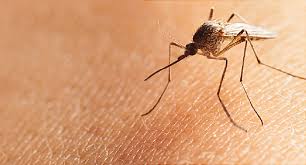